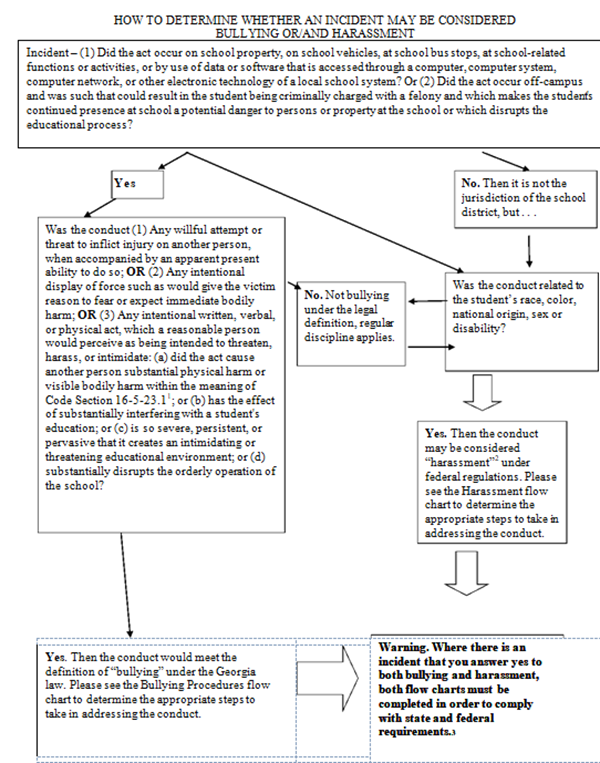 Incident – (1) Did the act occur on school property, on school vehicles, at school bus stops, at school-related functions or activities, or by use of data or software that is accessed through a computer, computer system, computer network, or other electronic technology of a local school system? Or (2) Did the act occur off-campus and was such that could result in the student being criminally charged with a felony and which makes the student's continued presence at school a potential danger to persons or property at the school or which disrupts the educational process?

1. Know when tips, rumors, or allegations require an investigation, even if the informer wishes to remain anonymous, and what can be ignored. Allegations of an inappropriate relationship with a student by a school employee or threats to student safety always warrant investigation.

2. Documenting a complaint is the foundation on which an investigation rests. Avoid telling the complainant the complaint must be put in writing for you to do anything and assist, when receiving a verbal complaint or conditions warrant, in preparing a written complaint.

3. Take time to plan the investigation, as failure to do so can enable people to cover their tracks. There are many ways to approach an investigation, depending on the nature of the complaint, e.g., personnel, parent, student, sexual misconduct, or discipline issues, all with varying degrees of seriousness, and no one way works in all situations.

4. Consider whether/when to involve other agencies, such as law enforcement or DFACS, and the possibility that they may claim they were not notified in a timely manner or that the investigation interfered with their investigation.

5. Identity the existing records or documents that may contain relevant information and get them immediately, before talking to witnesses; otherwise, documents may go missing. Plan to secure written consent where required.

6. Identify other individuals who may have corroborating evidence. Resist the feeling of urgency to go immediately to the accused or the complainant or to bring them together.

7. Decide which witnesses must be interviewed and in what order, balancing decisions with available time, which is usually limited. It usually is best to talk first to the most candid and most reliable witness because once the first person is interviewed, other potential witnesses probably will know the information and questions asked.

8. Before the interview, outline the questions to be asked, recognizing that spontaneity is necessary to follow up on answers received.

9. Decide when to begin the investigation. Consider the risk of starting on Friday afternoon and continuing on Monday, as long weekends can change an investigation.

10. Decide who will conduct the interviews, considering who is likely to be the most productive in getting the information. Whether central office personnel or the superintendent need to be involved in interviewing depends on the seriousness of the allegation and its potential for ending up in litigation. Although the board attorney may be consulted throughout the process, reconsider the urge to have him/her conduct the interviews, as his/her involvement in that capacity could result in later disqualification from representing the district or an argument that the attorney's interview notes are discoverable by an opposing party.

11. Decide who will witness the interviews as backup for the interviewer. Generally, it is not a good practice to use a peer teacher as a witness when a teacher is being investigated or for the principal to use his secretary. The accused is not entitled to have an attorney/advisor present unless law enforcement is investigating a crime. Students are not necessarily entitled to have parents present, but they should be informed/involved as soon as possible depending on the facts in the specific case.

12. Remember that recording witness interviews can be a two-edged sword that may be used against the district, as it will be available to the other side in an adversarial situation.

13. Emphasize the confidentiality of the investigation and warn against retaliation against the accused, the complainant, or any other witness. Do not deceive witnesses by telling them that information disclosed will not be disclosed to anyone else. Make clear that you are not asking anyone to take sides; all they need to do is tell what their eyes saw and their ears heard.

14. Resist the temptation to bring in a student with instructions to write down what happened. Consider a technique in which the administrator, with no notes or recorder, encourages the student to tell the story from beginning to end. Once the story is out, the interviewer drafts a coherent summary statement written in the first person, allows the student to read/correct it, and gets the student to add a statement such as "I affirm this is a true statement," accompanied by the signatures of the student and a third party who witnessed the interview.

15. Do not make statements during the interview that express an opinion one way or the other, as sympathetic listening can be misinterpreted as witness support that may come back to haunt the interviewer.

16. It is generally better to gather all relevant information from other witnesses before interviewing the accused so that there will be a frame of reference for evaluating the testimony of the accused. Decide in advance what information obtained from witnesses will be disclosed to the accused.

18. Be sure that interview or other investigation documents are properly identified and dated.

19. Document the process, regardless of whether the investigation is conclusive or otherwise, to protect the district from later allegations that administrators knew and did nothing. Avoid telling the complainant that there is no evidence. If there is no conclusive evidence, there should be statements from witnesses that led to that conclusion.

Decide what type of report, if any, should be produced detailing the investigation results and any recommendations the investigator may have, remembering any privacy or disclosure rights that may exist under the Georgia's Open Records Act or the Family Educational Rights and Privacy Act

2. According to the October 26, Dear Colleague letter, OCR's position is that harassment with motive based on "any actual or perceived characteristic including race, color, ethnicity, religion, gender, sexual orientation, ancestry, national origin, physical attributes, socioeconomic status, physical or mental ability or disability, or by any other distinguishing characteristic" can be investigated by OCR.

3. When starting an investigation, consider if you need others to be involved, including DFACS or law enforcement and possibility special education staff. Further, it may be necessary to include other administrators based on the severity of the incident and who may be best to interview certain witnesses.